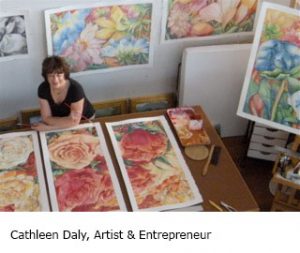 Our fascination with entrepreneurship is reflected in the millions of pages analyzing what qualities drive their ability to succeed at going out on their own. I’ve always been inspired by the success stories of some of the more idealistic – Richard Branson, Yvon Chouinard, and Jann Wenner come to mind. And then there’s my personal favorite Sir Ernest Shackleton. Their idealism, coupled with force of will, luck, possibly brilliance and certainly courage created exceptional brands and lasting legacies.

On a personal level, my Aunt Cathleen Daly lives her life in similar fashion and exemplifies the idealism of the entrepreneurial spirit. Like many of the most famous entrepreneurs, Aunt Cathleen has taken a very non-traditional path in life, one entirely of her own making.

Born and raised in tiny, isolated Eureka, California, she graduated from Cal-Berkeley and studied art at the Academia Dei Belli Arte in Rome and Atelier 17 in Paris.

She landed in San Francisco and began professional life as an artist. Along the way, her aesthetics and vision led her to invest in two beat-up Victorians in a forgotten and slightly scary part of San Francisco in the 1970’s. I can remember hearing other family members tease Cathleen about her life as an artist and her silly investment in two crumbling dinosaurs. Nobody is laughing now.

In order to create a space for her art, she repurposed both properties. One of the two Victorians housed a 19th-century printing press business. Only Cathleen saw what could be: an expansive artist’s studio, which she uses to this day. She also rehabilitated the remaining “pieces” of the building, creating them into elegant apartments.

The other Victorian, across the street, was a single-family residence. Cathleen saw something else. Out of the most claustrophobic dungeon of a basement, she created her light filled jewel of an apartment that opens onto a private, flower filled garden. The floors above became rental apartments to the technocrati found in abundancethese days in SF.

As she was renovating the properties, Aunt Cathleen was also traveling and exhibiting in Asia and taught at the University of San Francisco, College of the Redwoods and California State University-Chico. Her other eclectic accomplishments include receiving several fellowships from the Cite International des Arts (Paris) and the Virginia Center for the Creative Arts. Her artwork was also selected to represent the Carol Ann Haenicke Collection of Women’s Poetry at the University of Western Michigan and she was a member of the Taidemaalarillitto Ry (Finnish Painters Union). Her hometown museum Morris Graves Museum of Art exhibited her watercolors in 2010.

There are all types of entrepreneurs, but the most inspiring have an idealism that keeps them focused on the steps they need to take to transform those ideals into reality. I don’t think my aunt has ever considered herself an entrepreneur, but she inspires me with how she commits herself to transforming her ideals into the day-to-day embodiment of living out her vision of the world. Maybe that’s the secret.